Posted by carolinawildlife | Uncategorized | No Comments 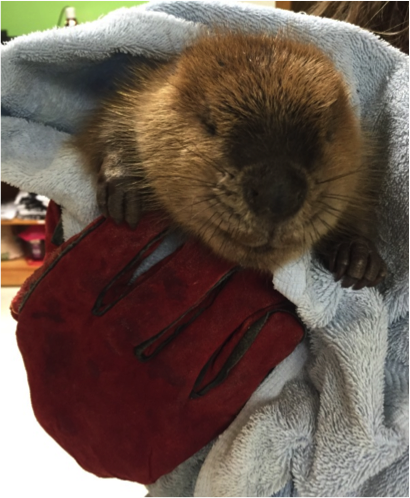 Cause of Admission: Possible Orphan

Patient History
On March 19, 2016, the staff of Carolina Wildlife Center admitted a rather unique animal, a North American Beaver (Castor Canadensis.) The beaver was found by a family on the side of the road. They attempt to re-nest it but unfortunately the beaver kept following them, which is a sign that it might have been orphaned. Upon initial examination, it was discovered the beaver, who is a female, weighed approximately 2.145 kilograms (about 4.73 pounds) and appears to be 8 weeks of age. After further examination, we saw that she had wounds on her lower back and tail, as well as a small part of her tail missing. She appeared to be bright, alert, and reactive but was emaciated. Also, her right femur may have been damaged. The beaver was given supported care via Subcutaneous Fluids, about a 5-10 minute swim in the sink and some leafy greens for a snack.

Natural History and Conservation
The North American Beaver is a nocturnal, semiaquatic rodent (the second-largest rodent in world behind the capybara.) Adults weigh anywhere from 24 to 71 pounds and can be as tall as 4 feet. They use their large webbed feet and paddle-shaped tails to help swim at speeds up to five miles an hour and remain underwater for up to 15 minutes at a time. Beavers are considered a keystone species. A keystone species is defined as organism that plays a crucial role in the environment they live. Without the keystone species, the environment would be extremely different or cease to exist all together. The dams that beavers build help create wetlands which almost half of endangered and threatened species of North America depend on to survive. They also help purify and control water.

Fun facts
• Beavers are very social creatures. They live in colonies and the kit would live with parents for two years. Older siblings would help raise younger siblings.
• Beavers do not hibernate. They will continue working during the winter.
• There are two species of beaver. The European or Eurasian beaver (Castor Fiber) and the North American beaver (Castor Canadensis).
• Beavers are second only to humans in their ability to manipulate their environment – the largest dam in existence is located in Wood  Buffalo National Park, Alberta, Canada. It stretches for 850m, and is visible from space.

Please consider making a donation to help care for this little girl and all of the animals Carolina Wildlife Center will take this year. Carolina Wildlife Care is a 501(c) (3) non-profit organization that rehabilitates injured and orphaned wildlife to reintroduce back into its natural environment. CWC receives no state or federal funding. Donations can be made at http://carolinawildlife.org/donate/